Handwritten lyrics sheet of your favorite song by Ivana.

I’ll write down the lyrics of your favorite song.

Please let me know your song choice on the “Check Out” page by Order Notes.

Extras: I’ll also autograph the sheet. If you like I can also personalize it with your name. 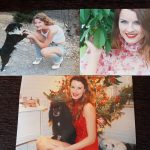 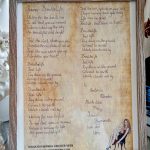 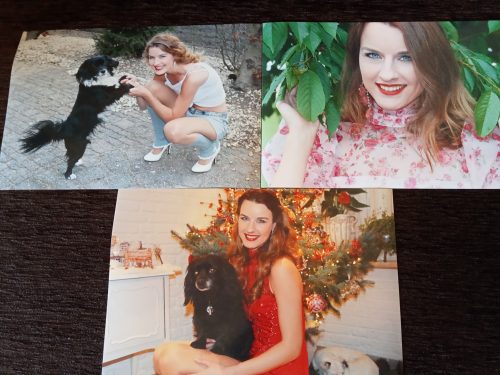 +1
Antonio Mendes Silva
Rated 5 out of 5
I received the beautiful and artistic handwritten sheet yesterday, at home, and I framed it to preserve the lovely sheet. Much love ♥️, Antonio 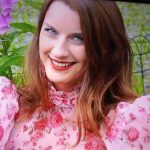 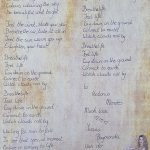 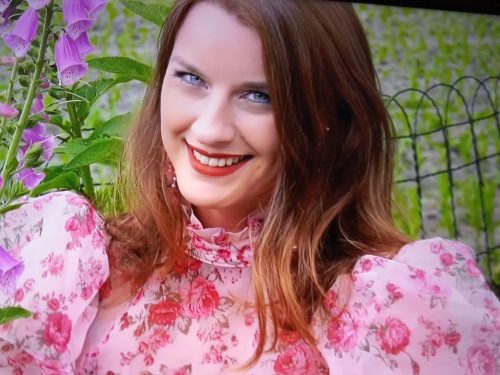 +1
Antonio Mendes Silva
Rated 5 out of 5
I asked Ivana a poster with a photo from the beautiful music video "Breathe Life" and the handwritten lyrics of the song ♥️ . I must confess that before I get the handwritten lyrics, I didn't understand all the song's lyrics. Now I can appreciate better the beautiful poem where Ivana is singing to breathe life, to feel the sun warming you up, to feel the wind strike your skin, to connect to the earth laying down on the ground to watch the clouds moving on the sky and wait for that magical special moment when the rain starts to fall and feel the drops of the rain on your body. Even with her beautiful hair wet, she remains beautiful and charming with her lovely dress with beautiful pink flowers and she looks a dream's doll dancing on the rain. The video ends with the beautiful Ivana smiling, a wonderful smile that worth more than gold! Much love ❤️, Antonio 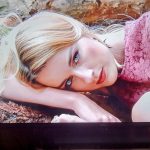 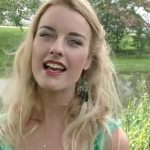 +1
Antonio Mendes Silva
Rated 5 out of 5
A charming lady, with a incredible beauty, a incredible singer, with a wonderful voice, a artist, with an incredible talent, that can make amazing paintings, compose beautiful music and write beautiful poems for the songs, this is Ivana ❤️! 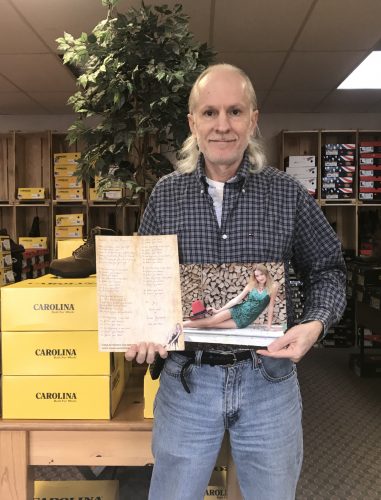 Jerry Richards ❤️
Rated 5 out of 5
"A New Beginning" - What a wonderful song to have to look at and be reminded of seasons of our lives. Really happy that I have this lyric Sheet from one of Ivana's Originals added to my nice little collection of her originals. 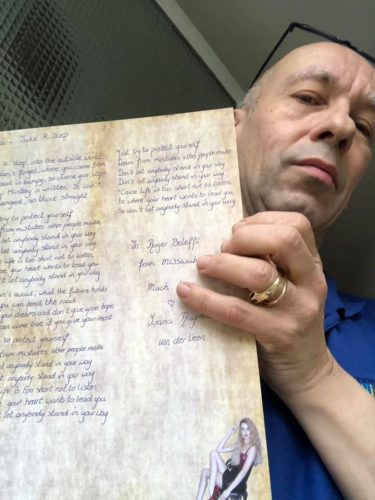 Roger Beleffi
Rated 5 out of 5
Great investment my best sponsoring ever Pls. check out this wonderful and great video! Video: Take a Step. https://www.youtube.com/watch?v=JhsIOorzrGw
David Williams
Rated 5 out of 5
As a fella with Ivana Merch that's stored in random places round his home, I'd just like to express respect for Jerry's impeccably arranged Ivana Shrine, as shown below. I haven't seen a museum case that beautifully organised since Jerry took me to the native American Pinson Mounds in Tennessee. Except Ivana's jewellery is sparklier, her writing prettier, and her photos more arousing than anything they kept in a lighted box at Pinson. I'm a bloke who buys Ivana Merch then uses it to death- from T-shirts, mugs & mousepads through to calendars, keyrings, posters, belts & pens- but keeping stuff in a sacred case? That's still beyond me. One of these days I shall buy lyrics too but it's hard to keep up with the serious collectors. Well done, sir. 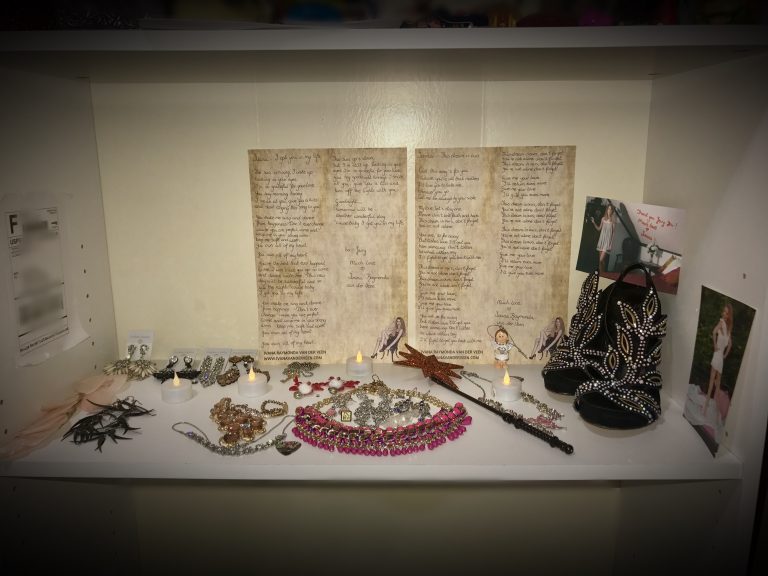 Jerry Richards
Rated 5 out of 5
I was so happy today to receive my handwritten lyrics sheet for Ivana's second original song "I Got You In My Life" to go with "This Dream Is Ours". It goes very nicely with my collection of her sweet memorabilia. Now I can get both of her Originals framed. 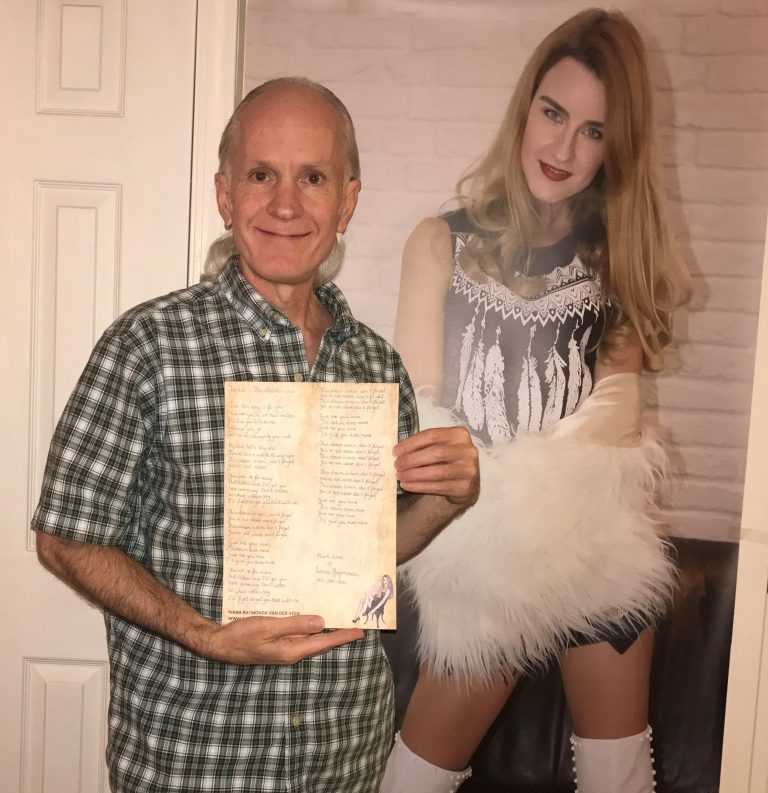 Jerry Richards
Rated 5 out of 5
WoW! I am so #Excited that I have received the very first handwritten lyric sheet from Ivana's very first self written, arranged, and produced original song. I feel honored and privileged. Ivana is always sooo very good to her fans. Doing what she can to show them that they mean a lot to her and that she values their loyalty and friendship. I really don't know what else to say except that she puts a lot of pure unadulterated heart into handwriting out her lyrics that you almost can't tell them apart from a robot or computer writing them. That is exactly how perfect her handwriting is. But after careful analysis with beautiful photo books and certificates of authenticity from her much desirable outfits from her music videos I can vouch for and verify that these are something that you can cherish as the real deal for a long time if you are a true fan and friend of hers. I recommend that you choose your favorite song from your favorite video and indulge yourself in something that Ivana is guaranteed to put Much Love from her Heart and Love and Dedication into writing out for you. Why? Because she Loves her Fans and she Loves what she does. Best Regards, A Humble Fan
Michael
Rated 5 out of 5
Love my special gift. Ivana will write out any song with a personal message to you.

This site uses Akismet to reduce spam. Learn how your comment data is processed.